The Hague, Den Haag or 's-Gravenhage, is the capital of the province of South Holland. The city is home to the Dutch government and parliament, and it is the residence of the royal family. Although The Hague is not the capital of the Netherlands, it does fulfill that role. Almost all embassies and ministries are located in The Hague. In addition, the city is the seat of various national and international courts, including the International Court of Justice and the International Criminal Court.

There are many primary and secondary schools that provide education at the levels from VMBO to gymnasium. Examples include the Christelijk College De Populier, the Segbroek College, the Maerlant-Lyceum, the Wateringse Veld College, the Dalton The Hague, the Zandvliet College, the Edith Stein College, the Roman Catholic Primary School De Paradijsvogel, the Lyceum Ypenburg, the Vrijzinnig -Christelijk Lyceum and The Hague Montessori Lyceum. The Hague has two independent gymnasiums: the Gymnasium Haganum and the Christelijk Gymnasium Sorghvliet. In addition, there are also private secondary schools such as Luzac College and Winford College.

For MBO, The Hague has the ROC Mondriaan, where 17,000 students follow secondary vocational training in 170 disciplines.

Most employment in the city, for 26% or 56,000 people in 2006, is provided by the government and international organizations. Major employers from this sector include the Municipality of The Hague and the Ministries of Defense, Justice, VROM, Foreign Affairs, the Interior and Transport, Public Works and Water Management.

Other important sectors in the city are business services with 19% of employment, healthcare with 14%, leisure economics with 10%, small-scale manufacturing and wholesale with 10%, and the TMT (Technology, Media and Telecom) sector with 10% . The 10 largest commercial employers account for 11% of employment: KPN, ING Bank, PostNL, T-Mobile, HTM, AEGON, Siemens, Ahold and Shell.

The Hague: Den Haag or 's‑Gravenhage is a city on the western coast of the Netherlands on the North Sea and the capital of the province of South Holland. It is also the seat of government of the Netherlands and hosts the International Court of Justice, one of the most important courts in the world.

With a metropolitan population of more than 1 million, it is the third-largest city in the Netherlands, after Amsterdam and Rotterdam. The Rotterdam–The Hague metropolitan area, with a population of approximately 2.7 million, is the 13th-largest in the European Union and the most populous in the country. In the west of the Netherlands, The Hague is in the centre of the Haaglanden conurbation and lies at the south-west corner of the larger Randstad conurbation.

The Hague is the seat of the Cabinet, the States General, the Supreme Court, and the Council of State of the Netherlands, but the city is not the constitutional capital of the Netherlands, which is Amsterdam. King Willem-Alexander lives in Huis ten Bosch and works at the Noordeinde Palace in The Hague, together with Queen Máxima. Most foreign embassies in the Netherlands are located in the city. The Hague is also home to the world headquarters of Royal Dutch Shell and other Dutch companies. 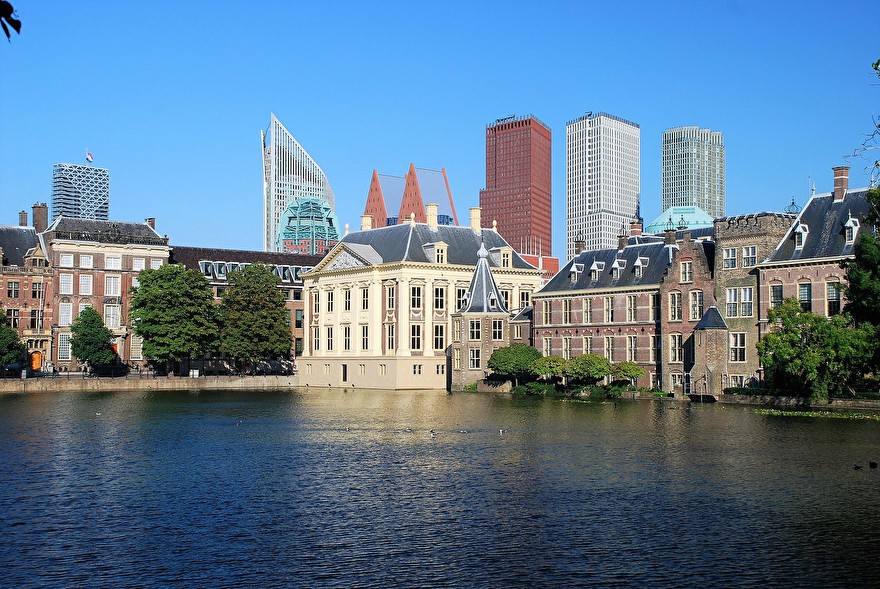